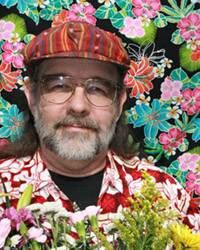 Craig Hopwood is a well-known sound engineer who works in the Baltimore-DC area. He has been the house soundman for Madam's Organ in Adams Morgan since 2001. He has also run sound for KIVA and Cerridwin's Coffeehouse since 1998, including our recent 2010 Beltane gig in Virginia.

Recently, Craig underwent open-heart surgery for a quintuple bypass operation. The surgery went well and he is recovering nicely. The problem is that Craig is self-emplyed and has no health insurance. He not only owes the hospital a bunch of money, but he lost a lot of work while recovering and now is in danger of losing his apartment and his sound gear, and thus his livelihood.

Madam's Organ sponsored a "Benefit for Craig Hopwood" in mid-May. The Johnny Artis Band played and they raised money to help pay Craig's medical, and other, bills. The concert was a success, but there's so much more we can do to help.

If you can, please contribute to the "Craig Hopwood Fund" through the PayPal button below. The money will all go to Craig (except the PayPal fee), so please give what you can to help him out.